There has been much talk from members of Congress and some Governors to "reschedule" marihuana within the Controlled Substances Act.  However, what they don't tell you  is that moving cannabis to a different schedule does not eliminate any federal criminal jeopardy from patients or their collectives.  In some instances the penalties under Schedule III are more harsh than its current Schedule I.

Please educate yourself and share this paper with your legislative officials. 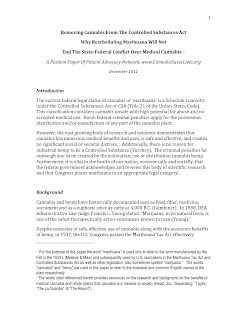 LA City Council may hear an emergency motion to ban collectives in Los Angeles tomorrow.  Contact the Council and urge them to work on regulations, prohibition will not work and patients DO NOT want to be pushed back to the black market.

Please send an email or make a phone call before the LA City Council meeting on November 23, 2011.

Here’s the email short-list of all council members and their staff assigned to medical cannabis: