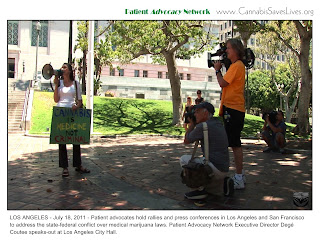 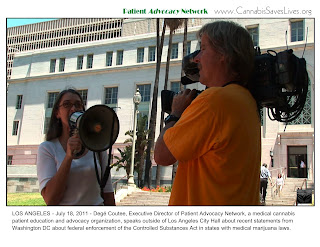 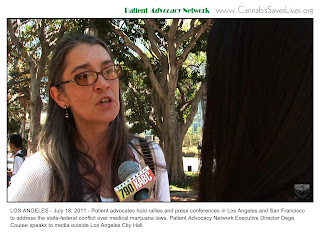 On July 18, 2011, medical cannabis patient advocates took to the streets of Los Angeles and San Francisco to express concerns about recent statements from Washington DC including the Cole Memorandum. News is that it will be business as usual with respect to federal enforcement of the Controlled Substances Act. Patients are concerned that there will be more hostile smash and grab raids and selective prosecutions.

Patient Advocacy Network has reached out to nearly 90 Congressional offices to discuss medical marijuana, the Controlled Substances Act and continued federal criminal jeopardy for patients. Governors and State AG’s in all medical cannabis states have also been called upon by PAN to help end the federal criminal jeopardy for patients and their cultivators. It is PAN’s contention that cannabis is inappropriately placed in the CSA and needs to regulated more like beer or wine. This is the only legal model that keeps cultivators safe, as safe as those who grow grapes and hops.

While only a handful of patients participated in the LA rally, PAN got the attention of many media outlets: TV, radio, print and internet. “We feel it’s extremely important to be here and express the fear patients and their collectives have over further federal interference BEFORE there are any federal actions this season,” states Degé Coutee to the media during the rally. “The DEA got their funding today on the heels of some very strong statements from Washington. We fear federal raids and prosecutions on non-violent, otherwise law-abiding citizens, some of which are seriously ill or disabled.”

PAN encourages supporters to get involved with its Legislative Education programs and upcoming rallies and street theater by becoming a sponsor. All monetary and in-kind contributions are tax-deductible.
Posted by Cannabis Patient Voice at 4:13 PM 0 comments